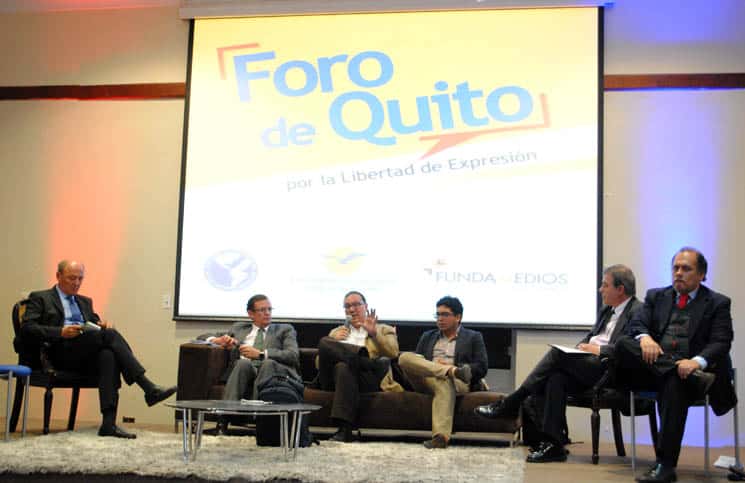 The Quito Forum for freedom of expression expressed its solidarity with the situation of Fundamedios and rejected the Ecuadorian government’s intention, through the Communications Secretariat (SECOM), to dissolve Fundamedios. At the same time it requested all global agencies that work on freedom of expression to pronounce themselves on this case. It also announced the creation of an international commission to visit the OAS and other agencies such as the IDB and the CAF. It demanded that the amendment regarding Communication should be permanently eliminated and invited the Ecuadorian government to request an Advisory Opinion from the Inter-American Court on the Communication Law.

These are part of some of the actions that the Quito Forum resolved on Tuesday during its meeting, called for by the Inter American Press Association (IAPA), Andean University Simón Bolívar and Fundamedios. The event brought together journalists, editors, press associations representatives and defenders of freedom of expression in the region.

Daniela Chacón, Deputy Mayor of Quito, on behalf of Mayor Mauricio Rodas, who could not attend because of the fires that were raging in the city, opened the event with a message about the importance of freedom and its defense. «The right to freedom of expression promotes authentic political participation, however uncomfortable that can be for rulers. But the discomfort of rulers is not the yardstick by which the rights to freedom are measured, let alone the guideline to establish restrictions on the exercise of these rights».

César Ricaurte, executive director of Fundamedios, expressed his thanks for the countless expressions of solidarity. And he emphasized: «The defense of human rights is a political act that Fundamedios asserts. Politics cannot be privatized, having political opinions is a right of all human beings». He stressed, however, that this cannot be equated with partisan politics. He also reiterated the organization’s decision to exercise its right to resistance. «We will not deliver Fundamedios to SECOM. We will remain in our offices, let them come for us», he said in the midst of applause.

Gustavo Mohme, IAPA president, stated that the dissolution of Fundamedios is much more than an attack on an organization. «It is an attack on the very essence of democracy». While Ricardo Trotti, IAPA executive director, said that «without complaint, there will be no remedy to the violation of rights».

Edison Lanza, the IACHR Special Rapporteur for Freedom of Expression, expressed his solidarity with Fundamedios’ situation through Skype and expressed concern over the situation in Ecuador. He stressed that the Inter-American Human Rights System has proven to be one of the most independent and requested everyone to be on the alert to the creation of new organizations that may be submitted to governments.

Local organizations also pronounced themselves. Marcelo Larrea, of the National Federation of Journalists (FENAPE), condemned the publication of notices sent by an «illegally established alleged Federation of Journalists. This is no more than one of several ways the government uses to split professional associations». Galo Monteverde, of the self-summoned Assembly in Quito, said that democracy is in danger because the government persecutes all critical voices.

In 5 panels, international guests including Claudio Paolillo, of IAPA and the weekly Búsqueda of Uruguay; Fernán Molinos, of Metro Libre (Panamá); Nora Sanín, Andiarios (Colombia); Kela León, of the Peruvian Press Council; Don Podesta, of CIMA; Daniel Dessein, of WAN-IFRA; Rolando Archila, of Publinews (Guatemala); Luis Pardo, of the International Association of Broadcasters and the Association of Broadcasters of Chile; Ricardo Corridor, of the New Journalism Foundation (Colombia); Pedro Vaca, of IFEX-ALC; Ricardo Uceda, of IPYS Perú and the Committee to Protect Journalists (CPJ); and national guests such as Vicente Ordoñez, of the National Union of Journalists; María Paula Romo and Francisco Barboza, of the Universities Internacional Externado of Colombia, respectively; Diego Cornejo, of the AEDEP; and journalists such as Luis Vivanco (La Hora), Martín Pallares (independent) and Juan Manuel Yépez (Extra), reflected on the situation of journalism and the press two years after the adoption of the Communications Law in the country.

SOME ACTIONS AND COMMITMENTS OF THE QUITO FORUM FOR FREEDOM OF EXPRESSION: