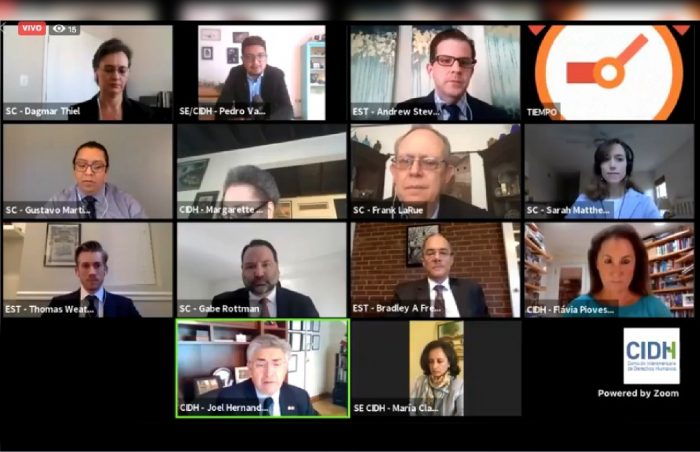 Washington, October 7, 2020.- Fundamedios and Reporters Committee for Freedom of the Press denounced today, in the 177th Period of Sessions of the Inter-American Commission on Human Rights (IACHR), violations of freedom of expression and freedom of the press that have occurred since May 2020 during the recent protests in the United States.

When presenting this complaint, the two organizations asked the IACHR: That the Commission issue a statement protesting the detentions and excessive use of force against journalists during public protests for restricting freedom of expression.

That the Commission demands that the State stop all arrests and the excessive use of force against journalists.That a petition is formulated at all levels of the United States government to carry out a thorough investigation of the incidents reported by organizations that document violations of freedom of expression and to make the results of these investigations public.

Establish a set of principles and recommendations for law enforcement and security authorities at the local, state and federal levels regarding respect for the press during public events of any kind, particularly demonstrations, and how to guarantee freedom of the press and the safety of journalists.

These recommendations should cover:

That is, officers must ensure that crowd control tactics are appropriate and proportionate. Such tactics must be designed to prevent collateral damage to journalists covering protests and must not unduly restrict that coverage.

The speakers from civil society at this thematic hearing on freedom of expression in the United States were Frank LaRue, Legal and Defense Director of Fundamedios; Gabriel Rottman, Director of the Technology and Press Freedom Project and Sarah Matthew, Lawyer for the Reporters Committee for Freedom of the Press (RCFP). And as a witness to the violations, the journalist Gustavo Martínez Contreras. Frank LaRue said this hearing was requested by Fundamedios and the RCFP in light of the attacks and harassment by law enforcement officers suffered by journalists covering peaceful public demonstrations against racism throughout the United States since May 2020.

«From the highest level of government of the president of the nation, we have a systemic discourse of attack against the press and independent journalists, calling them «enemies of the country», «enemies of the people», » false media «, » false news «, «liars». This confuses the population and has progressively eroded the trust that society may have in the media”, LaRue said.

U.S. Press Freedom Tracker has reported more than 850 incidents of violation of freedom of expression during the coverage of protests and demonstrations so far in 2020. 81% of the documented cases correspond to excessive use of force or arbitrary detentions by the forces of order. Sarah Matthews, a lawyer for the Reporters Committee for the Freedom of the Press, assured that «the most serious thing is to show the tendency that the police had the clear objective of attacking journalists who were clearly identified as the press». The attacks have been registered in 79 cities in 36 states.

Rottman said that recent months have seen a significant increase in arrests and the use of force against members of the media covering the protests. In many cases, the incidents appear to violate clearly established laws in the United States, including rights that have long been recognized under the First Amendment to the United States Constitution.

Gustavo Martínez Contreras, a journalist for Asbury Press, presented himself as a witness and example of the 100 journalists who have been detained or attacked since May 2020 in the United States. Martínez, who was arrested on June 1st in New Jersey, was detained for 5 hours, despite having worn his press badge on his chest from the beginning.

“My experience on the night of June 1st at the Asbury Park protest continues to haunt me. I have no doubt that I was a target for the police to be approached and arrested because I was reporting on events around me, protected by the First Amendment in my right to do so. I hope that by speaking today, you will help ensure that many other journalists can report freely without censorship by law enforcement”.

Pedro Vaca, the new Rapporteur for Freedom of Expression, said that it is difficult to find another country in the region that has been more respectful of press freedom than the United States, so the reported events call for deep reflection to maintain fundamental freedoms.

Although the United States has not ratified the American Convention on Human Rights, the legislation and doctrine of the Organization of American States are binding on all member states.

Bradley A. Freden assured that «they condemn the threats and harassment against journalists because they should not suffer harassment for carrying out their work in accordance with the law» and assured that the United States is committed to defending members of the press with investigations when there are violations to rights.

At the end of the Hearing, the President of the IACHR, Joel Hernández, thanked Fundamedios and RCFP for the information and highlighted the positive, proactive and constructive attitude of the Government representatives.

“For us, this hearing is very timely, we recognize the strength of democracy in the United States (…) we are aware of the impact that its Constitution had worldwide to protect press freedom; We know that the United States has established a standard to protect civil and political rights and that is why we are following with concern the high attack on members of the press». He recalled that for the IACHR it is a sensitive moment since social demonstrations are more active than ever throughout the region and that is why it is important to safeguard the right of the press to be able to carry out its work. «We express the best aspirations so that journalists and communicators can carry out their work without any interference by covering social protests», said the Commissioner.

The IACHR is an essential organ of the Human Rights Protection System of the Organization of American States, and it is in charge of contextualizing and documenting human rights violations and holding States accountable for their actions and rulings in protecting the rights of its citizens.